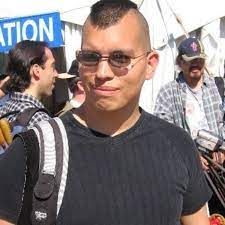 Chad is a Mohawk of Kahnawake, working at Aboriginal Initiatives in conjunction with Corrections Canada as an Assistant Elder and Cultural Facilitator. In his spare time, he is a volunteer fire fighter and first responder, as well as a Pow-wow drum carrier, drummer and singer. In his words, “I try to live my life as a positive role model and inspiration to others.”

He was dealt a deck of cards that included many challenges; surviving being abused sexually by a relative, having a parent and other key family afflicted with alcoholism, the Oka crisis, the racism of being a Mohawk native in Quebec, and being denied his culture by purpose and circumstance, resulting in anxiety and depression. Yet Chad states:

I would not change them if I could. I accept these, because they are a part of me, just like my left arm, or foot are. They have allowed me the opportunity to grow, test myself and through the knowledge and experience gained – HELP OTHERS.